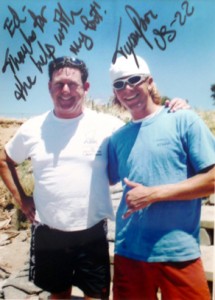 Tyson Poor, US-22. “I’ve known Dr. Camp for years because of his sponsorship of ABK Boardsports Windsurfing Camps. I met him at ABK in Rio Vista while I was teaching in the summer of 2003 and I’ve trusted him with my injuries ever since. In the 2004 King of the Bay competition I injured my foot, Dr. Camp taped me up and I went on to win it for the third straight year in a row. Thanks Dr. C”

Tyson poor ranked one of the best freestyle windsurfers in the world. He sail’s locally in the Delta and competes world wide. Tyson currently spends a lot of his time between Hood River Oregon where he sails in the Columbia River Gorge and mountain bikes. He is also known to frequesnt Baja California where he teaches windsurfing to enthusiasts from all over the world at  Pro Windsurf La Ventana. You can find more about Tyson Poor and Pro Windsurf on the internet.