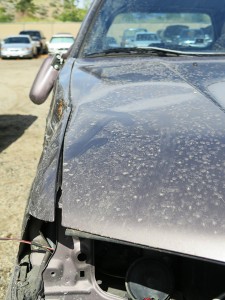 There is a lot of argument in the Med-Legal community as per the effects of auto accidents particularly those with “Low Speed Impact.” Insurance companies love to argue about low speed impact auto accidents and their potential for producing soft tissue injury. The debate tales place amongst the people who suffer from the resulting pain and their insurance companies who feel a distinct dislike of paying for the resulting care. I think this exists in part due to the fact you can’t SEE soft tissue trauma though there are ways to measure its effects.

Which side of the argument a person falls upon usually depends on whether you are the injured party or the carrier who has to pay for the care. The medical literature is actually very supportive of the fact that a patients level of injury relates very little to the vehicle speed at the time of impact or the dollar amount of damage to the care and more to a series of other conditions.

True story, I recently had an insurance adjuster state “You can’t believe a comprehensive exam is justified for a soft tissue injury?” Well yes I do as a matter of fact. This is representative of how jaded the insurance adjusters have become. I am more amazed that they would chastise a Doctor for being thorough in the execution of his duty to his patient.

You need to find a practitioner and an advocate who understand these principles and will fight for your rights.

The following is only one article on the subject that I’d like people to be aware of. It appeared in the Journal of Manipulative Physio Therapy 1998 (Nov): 21 (1): 629-639 the following are excerpts from the article:

Background: There is a controversy regarding likelihood of injuries sustained when one car strikes another at a relatively low speed with little or no vehicle damage. Plaintiffs often claim injuries while defendants counterclaim that injuries could not have occurred with such a relatively minor impact.

Objective: To review the dynamics of low speed rear-end collisions resulting in little or no visible damage and to see if occupant injury can occur; also, to discuss diagnostic and treatment that may be helpful to the clinical practitioner.

Data Selection: A medline search of low speed rear-end was conducted. Other articles and studies were reviewed that discuss low speed rear-end collisions and factors impacting the neuromusculoskeletal system relevant to clinical practitioners. Articles included were: human low speed rear-end tests, lab tests on cadavers, automotive engineering papers, and peer reviewed journal articles on whiplash. A few live animal and simulation studies were considered for the background of possible injury mechanism and vehicular deformation. Excluded were non rear-end and single case reports as these were not a part of the sturdy group.

Data synthesis: The data was studied to find a relationship between the resultant vehicle dynamics with occupant movement, biologic mechanisms of injury and the neurological mechanisms causing complaints. Data was also studied to investigate objective findings supporting subjective complaints.

Conclusion: In low impact collisions, there are usually no skid marks, minor or no visible damage to the vehicle. There is a lack of relationship between occupant injury vehicle speed and/or damage. There does not appear to be an absolute speed or damage to a vehicle for a person to experience injury. Crash tests indicate a change of vehicle velocity of 4km/h (2.5 mph) may produce occupant symptoms. Vehicle damage may not occur until 14-15km/h (8.7 mph). Occupant soft tissue and joint injuries resulting from low speed vehicle collisions respond positively to afferent stimulation of mechanoreceptors. The diagnosis of the occupant injuries is reliant upon standard orthopedic neurological testing, the autonomic concomitant signs and qualitative sensory testing.

Some of the factors that are apparently involved with the event of injury from these types of cases are head forward posture, military (Straight) neck and whether the victim of the accident was aware or not aware of the impending collision.

And there you have it folks from a peer reviewed article about the nature of soft tissue trauma in auto accidents with low speed impact. Suffice it to say if you have suffered from “Whiplash” which we now prefer to call Cervical Acceleration Deceleration injury, Don’t believe your carrier if they tell you there is no compensation available to you based on the speed of your impact.

I hear this argument all the time from patients of mine who are being pressed to settle by the carriers. If you are hurt in an auto accident get yourself an attorney to protect your interests and don’t be tempted to deal with the carriers directly. You have to remember their interests are not your own and they have a lot of practice dealing with people who don’t understand the laws, the literature, or in fact the mechanism of your injury and its Potential future complications.

Thanks for reading this and I hope you find it helpful.