Whiplash, real… or not real ? Myths and their insurance carrier origins… 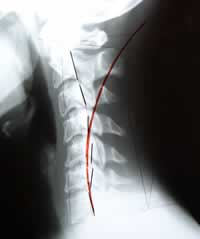 The following is a redux of an article that appeared in Spine magazine talking about yet another myth associated with auto accidents perpetrated by yes….. all of our insurance carriers. Yes we are required by law to pay them for coverage, yet they defraud us daily with bad science to protect their profits and deny us health care when we need it most.

Let me state in no uncertain terms, this is NOT the article verbatim, I am quoting the article and re-writing it in English as opposed to terms the general public won’t comprehend (Though I may use some of them). In other words I’m writing this for you so that YOU can comprehend what is going on in the world of personal injury.

We have all heard of the term “Whiplash” and it’s a VERY common occurrence when one has an auto accident. It’s a term that has had a strong meaning to those who have suffered one and a term that is detested and reviled by the insurance taking on the same meaning as fraud. This is patently ridiculous.

Currently one of our front runners on the research side of Chiropractic has re-defined it as “Cervical Acceleration Deceleration Injury” (CAD). This is a more accurate name for it and as such one of the issues I try to champion.

There are several studies about whiplash produced over many years. Some of them suggest whiplash injuries are impossible at certain speeds and others state that the problem is psychological or feigned as a means to make monies from a claim against insurance companies.

These articles are the MINORITY and contradict the majority of the literature, which shows that whiplash injuries and their concomitant issues are an incredibly common problem that affects a huge proportion of our society.

The premise of the critique was to examine the methodology of the articles bashing the validity of whiplash syndrome and to determine if the scientific methodology was sound.

Needless to say, the current critique found that all the articles disparaging whiplash syndrome had significant flaws in their science. The most frequent flaws were inadequate study size, non-representative study sample, non-representative crash conditions (Crash tests) and inappropriate study design.

This review of the literature states “There is NO epidemiological or scientific basis for the following statements”:

1) Whiplash injuries do not lead to chronic pain. 2) Rear end impact collisions that do not result in vehicle damage are unlikely to cause injury. 3) Whiplash injury is bio-mechanically comparable to common movements of daily activities.

Anyone who has suffered a whiplash injury has probably heard one or all of the above statements. These specious arguments are made by insurance companies daily I believe knowing full well that they are not based in reality or based in a reality of convenience for their own benefits.

I can assure you no one makes enough money from a personal injury case to justify the many trips to the Doctor and treatment sessions that some find less than pleasant. These anti whiplash syndrome myths, are spread only by the auto insurance carriers who want to take in maximum (Government mandated) premiums for themselves, and then not follow up with their obligations to their insured to see that they get the necessary treatment to recover from an auto accident that they have had the misfortune of having one and being injured.

If anyone is perpetrating fraud here, it is those who choose to ignore the vast majority of the literature, which states whiplash (Cervical Acceleration Deceleration Injury) are very real indeed and focus on the few studies that justify their own desires.

It has become so grim in the field that many attorneys who have handled personal injury cases in the past are no longer taking them or… only if the car was totaled.  Sad but true having a Doctor who keeps meticulous notes, and an attorney willing to go the extra mile has never been more important to the victims of an auto injury.